#YouAintBlack! How dare you have questions! 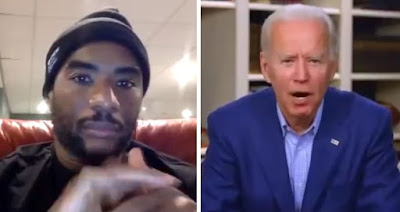 Erin Flockhart in newspushed.com brings us remarks Joe Biden made today to a black radio host who calls himself Charlamagne tha God. One of Biden's handlers was trying to terminate the call, so Charlamagne invited Biden to visit the show when in New York, because "We still have questions!" Flockhart:Former Vice President Joe Biden made an embarrassing flub that could cost him significant support among African Americans in the United States.

Joe Biden was doing an interview with Breakfast Club co-host Charlamagne tha God, who after so many broken promises from Dems over the years wanted to know if Biden would be different.

To which Joe Biden said “then you ain’t black” if you have to figure out who to vote for.

“I’m not acknowledging anybody who is being considered, but I guarantee you: There are multiple black women being considered. Multiple,” Biden said of his possible vice presidential nominees.

At that moment an aide to Biden broke in and tried to end the interview, “Thank you so much. That’s really our time. I apologize,” the aide said.

“You can’t do that to black media,” Charlamagne said.

“I do that to white media and black media because my wife has to go on at 6 o’clock,” Biden said before adding: “Uh oh. I’m in trouble.”

“Listen, you’ve got to come see us when you come to New York, VP Biden,” Charlamagne added. “It’s a long way until November. We’ve got more questions.”

“Well I tell you what, if you have a problem figuring out whether you’re for me or Trump, then you ain’t black.”

Here is the twitter video of the exchange thanks to JC McCallum at News Thud.


.@JoeBiden: "If you have a problem figuring out whether you're for me or Trump, then you ain't black." @cthagod: "It don't have nothing to do with Trump, it has to do with the fact -- I want something for my community." @breakfastclubam pic.twitter.com/endvWnOIV2

Email ThisBlogThis!Share to TwitterShare to FacebookShare to Pinterest
Labels: #YouAintBlack