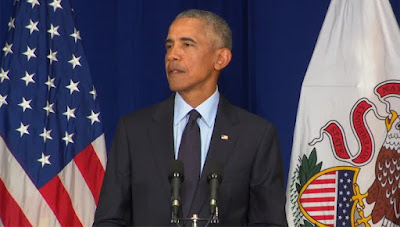 From the satirical Babylon Bee:

URBANA, IL—In a moving speech delivered Friday, President Barack Obama called for the nation to turn from fear, anger, and resentment, despite having stoked these emotions at every opportunity during his time in office.

The man who had carefully stoked divisions and pushed identity politics for a full eight years called the nation to turn away from divisive “politics of resentment” and instead be loving and inclusive.

“Common ground exists, I have seen it, I have lived it,” he said, though his presidency was spent turning people on each other and encouraging a culture of victimhood and resentment. “I know I spent a lot of time encouraging you to feel oppressed by each other so look to the federal government to fix it and turn a blind eye while I massively increased the power of the executive branch. But this time I’m serious. Let’s not hate each other, at least not until a Democrat is in office again.”

He also blasted President Trump for his policies and brash style of governance, hoping the assault on Trump’s rude behavior would help Democrats forget that Obama bombed foreign countries constantly throughout his presidency. “Trump is really mean, let’s all focus on that,” he said.