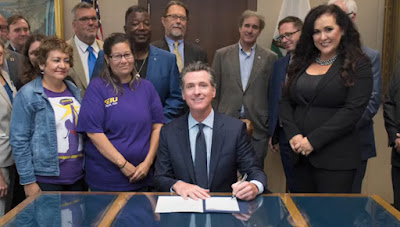 From the satirical Babylon Bee:

California Ends Exploitation Of Workers For Good By Banning All Jobs
August 20th, 2020

SACRAMENTO, CA—California has claimed victory over the horrible abuse and exploitation of workers at the hands of evil employers with a new bill, AB666, which will make it a crime to work for a living.

The new bill, signed into law by Governor Newsom Thursday, will stop the mistreatment of workers forever by making it illegal to work.

"Employers used to do bad things -- well, not anymore," said Newsom at the bill signing. "Not on my watch. This solution is guided by SCIENCE. Leading SCIENTISTS say that when you can't work, you can't be exploited by evil corporations and wicked billionaires."

Newsom then put on some scientist-looking goggles and held up a beaker filled with a blue substance as the media applauded.

"This is a huge victory for workers," said CA Assemblywoman Lorena Gonzalez. "If you want to exploit employees by paying them to work, you'll have to move to another state."

She then snapped her fingers in a Z formation as the media applauded.

California politicians were then baffled as millions of corporations and people moved to other states.