Watch Out Lefties, Here We Come!

Today was an invigorating experience, as about one hundred liberty-loving bloggers from the center and right side of the political spectrum gathered at a downtown Denver hotel to organize ourselves into a more cohesive force. The speakers were inspiring, the fellowship was terrific, the sharing of ideas was wonderful, and all went away ready to do battle. Senatorial candidate Bob Schaffer dropped by, and I am sure he, too, gained some inspiration from the love shown him by the bloggers in attendance.

We acknowledge that the lefty side of the blogosphere got a head start on us nationally and in Colorado, but now they seem to be self-destructing, leaving a place for those on the center and right to zoom past them in the the marketplace of ideas.

The first speaker was Ross Kaminsky, who lives in the mountains above Boulder. He regularly writes for Human Events, and his blog is Rossputin.com. Ross pointed out that fully half of bloggers on the right do not self-identify as Republicans, whereas most lefty bloggers do self-identify as Democrats. Bloggers on the right mainly want the government to leave them alone. Lefty bloggers have been out there so long that most of the most widely read political blogs are lefties. Democrat politicians are afraid of being targeted by the swarms of lefty bloggers. Republican politicians have no such fear. Ross gave us some ideas of how to rectify that situation. Ross has been blogging lately about ICE agent Cory Voorhis' work to put away behind bars some of the worst gangsters in Mexico.

Ross was followed by Jeff Goldstein of the Protein Wisdom blog. Jeff was a joy to meet. He is soft-spoken, self-effacing, humble, funny, and brilliant. I am looking forward to the possibility that he might cover the Democrat convention in Denver in August. He differed with Ross on the subject of whether bloggers have had an effect on Republican politicians. He cited the effort to stop the nomination of Harriet Meyers, and the effort to stop McCain-Kennedy. Jeff has a very loyal readership, because he requires his readers to invest themselves in the discussion of ideas.

Denise Mund has started four charter schools in Colorado. Denise's style is to ask a lot of questions, quote people accurately, and keep the focus on the basic ideals and philosophy of the charter school movement.

Here is a photo of Ross, Jeff and Denise. I apologize for Jeff's head being blocked out. I think he did that on purpose, so the lefties won't recognize him! 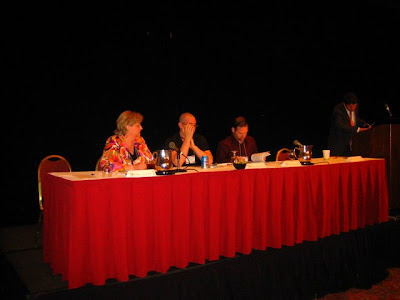 Another speaker was Trent Seibert, an investigative journalist who used to work for the Denver Post. He now lives in Tennessee, and was the journalist who exposed the mammoth energy consumption of Al Gore. Trent showed us how to dig for facts from public records. He really believes that bloggers are the next watchdog reporters, since newspapers are laying off staffs in large numbers. Bloggers are the last best hope for keeping an eye on elected officials and bureaucrats.

Jon Caldera is the President of the Independence Institute in Golden, and a very effective communicator on news radio KOA. Jon encouraged bloggers to narrow their focus in order to be more effective. He also emphasized the importance of bloggers focusing on local issues, becoming the most knowledgeable person on one issue.

Brad Jones runs a blog entitled Face The State. He is known for scooping the local mainstream media time and again by doing original, investigative reporting. It was clear to me that Brad is greatly admired and respected in the blogging community.

One of my favorites writers is David Harsanyi, columnist for the Denver Post. His brilliant, witty, insightful analysis of the American scene is matched by few. He joked that reporters are not lazy, they just haven't figured out how to use Google yet! He noticed that the lefty bloggers always seem to be on the same topic at the same time, while bloggers on the right are writing about many subjects, according to their own independent, individual interests. He pointed out that The Denver Post staff has dwindled by more than 200 people in the four years he has been a columnist there. Nevertheless, over 300,000 people subscribe to the Post, and Harsanyi encouraged bloggers to work with Post reporters to flush out all aspects of stories.

In the photo below, Harsanyi is on the left as you view the photo. Brad Jones is seated next to Harsanyi. I am sorry, I did not learn the name of the next person. Caldera is the handsome, but balding fellow who is next, followed by Trent Seibert. I also did not get the name of the gentleman who is standing. 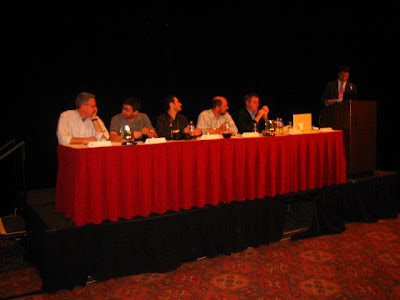 This sort of gathering is fascinating to me. What luck to be able to attend. Thanks for making me feel like I did. I am a believer that our media watchdogs will be and are the bloggers on the right and center. Ya'll do set a standard in my mind.