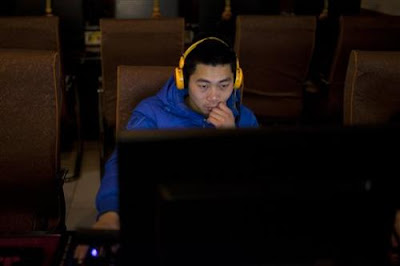 The latest measure requires users to provide their real names and other identifying information when they register with access providers or post information publicly.

It seems that some people have used the internet to complain about their government!

The measure comes amid reports that Beijing might be disrupting use of software that allows Web surfers to see sites abroad that are blocked by its extensive filters. At the same time, regulators have proposed rules that would bar foreign companies from distributing books, news, music and other material online in China. The government has given no indication how it will deal with the technical challenge of registering the more than 500 million Chinese who use the Internet.

The secretive ruling party is uneasy about the public's eagerness to discuss politics and sensitive issues online despite threats of punishment.

This week, 70 prominent Chinese scholars and lawyers circulated an online petition this week appealing for free speech, independent courts and for the ruling party to encourage private enterprise.

That gave ordinary Chinese a unique opportunity to express themselves to a public audience in a society where newspapers, television and other media all are state-controlled. Some of the most popular microbloggers have millions of readers. It also made the Internet a clearinghouse for accusations of official misconduct.

Next they will try gun control! Oh, wait, no need for that! The Commies want the benefits of technology, but they also want control of freedom of speech. Good luck with that!

I had a woman that came over from China to work with us at our company for a while to bone up on her translation skills a requirement by her gov't. She seriously believed that China had a responsibility to keep "crap" off the Internet and Tienanmen Square was a western propaganda move. Needless to say China did not send her back to the US, lol