"adopting a whole new approach centered entirely on the well-being of the American worker." 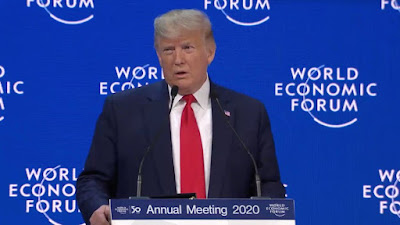 Don Surber brings us remarks made by President Trump today in Davos Switzerland at the World Economic Forum.

President Donald John Trump's address at Davos this morning was a lesson on governance by a man who entered politics less than 5 years ago.

Our president said, "America’s newfound prosperity is undeniable, unprecedented and unmatched anywhere in the world. America achieved this stunning turnaround not by making minor changes to a handful of policies, but by adopting a whole new approach centered entirely on the well-being of the American worker."

That is incredible. A billionaire spoke to fellow billionaires, fellow world leaders, and academics not about the swell digs they were staying at or the lush cuisine they enjoyed.

President Trump talked about actually serving the people who entrusted them with power.

He said, "Every decision we make on taxes, trade, regulation, energy, immigration, education and more is focused on improving the lives of everyday Americans. Only when governments put their own citizens first will people be fully invested in their national futures."

The president went through all the economic numbers. 3.5% unemployment. Consumer confidence up. Records shattered in the stock market. But his remarks on governing -- words that the press will largely ignore -- underscored the point that he indeed is the people's president.